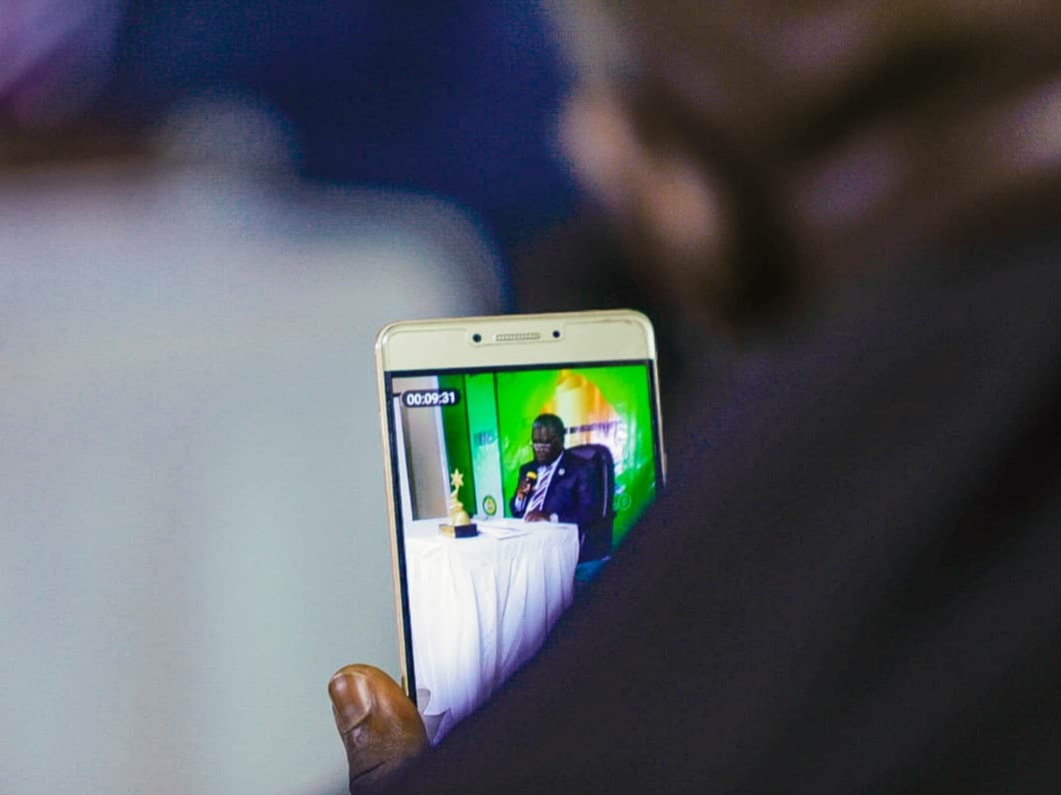 It is an honour and, indeed, a rare opportunity, for me to be part of this august occasion organized by the leadership of the Plateau Social Media Awards (PSMA). The broad theme of the programme is “Combating Fake News, Misinformation and Hate Speech in the New Media”. In light of the foregoing, I consider the theme crucial, apt and timely, considering the current realities that confront the Nigerian society in particular, and the whole world in general, in this era of computer development and technological advancement.

There is no gainsaying the fact that Nigeria has witnessed tremendous technological advancement in recent times. This has unavoidably led to the emergence of various social media platforms. These include Facebook, Instagram, Twitter, WhatsApp, Skype etc. Apart from the computer, these platforms also play a key role in modern-day information dissemination and communication. In fact, they are regarded as the fastest means of information dissemination and communication in the modern era.

I have been requested to speak on “The Legal Perspective to Hate Speech and Fake News in Nigeria”. By this topic, the following aspects call for examination in this presentation: The duty of the law to ensure impartation and reception of correct and genuine information. This is to guide against fake news.

The duty of the law to ensure that members of the society are not misled by misrepresentation or act on misrepresented facts.

The duty of the law to protect individuals and groups from being brought into public disrepute, disdain, opprobrium, odium, ignominy, obloquy, infamy, degradation, discredit, etc., which are comprehensively summarized into the word “hate”.

The trio are critical aliments that the law must be out to tackle in the New Media, which is characterized by the phenomena of fake news and hate speech.

Before examining the views of Radutzky and Claire on fake news, it  is relevant to define the concept as an umbrella term for information that are false and fabricated to mislead an individual or group of individuals on about a particular subject. In most cases, it is meant to cause harm, confusion, distortion and to deceive. It is a form of news consisting of deliberate disinformation or hoaxes spread via traditional news media (print and broadcast) or online social media. It is also known as junk news pseudo-news, alternative facts or hoax news. Fake news is written and published usually with the intent to mislead in order to damage an agency, entity or person, or gain financially or politically often using sensationalist, dishonest, or outright fabricated headlines to increase readership.

“Hate speech is akin to defamation while fake news is akin to misrepresentation. Thus, the duo are not entirely new phenomena in our legal jurisprudence. However, in the light of recent technological advancement brought about by the computer age, whether the existing statutes can sufficiently tackle the menace of hate speech and fake news is another question altogether.”

Michael Radutzky a producer of CBS 60 minutes defined fake news as “stories that are probably false, have enormous traction (popular appeal) in the culture, and are consumed by millions of people.”

….It is imperative to deduce that hate speech is the manifest expression of public disdain against the beliefs and things a person or group hold as sacred, basically on the account of their race, ethnicity, religion or other forms of primordial sentiments.

On the part of the presenter, it is suggested the following can serve as a working definition of hate speech: Any expression by parole, writing, symbole or conduct which communicates or conveys directly or indirectly any of the following constitutes hate speech: Distain for an individual or group;

The Constitution of the Federal Republic of Nigeria, 1999, as amended, provides for the right to freedom of expression and the press. However, this right, as fundamental as it is, is not absolute. There are circumstances in which it can be derogated from. These circumstances have been captured in Section 45 of the Constitution, which provides:

Nothing in Sections 37, 38, 39, 40 and 41 of this Constitution shall invalidate any law that is reasonably justifiable in a democratic society –

In the interest of defence, public safety, public order, public morality or public health; or

for the purpose of protecting the rights and freedoms of other persons.

By the above, therefore, there is no gainsaying the fact that the right to freedom of expression and the press would be curtailed in the interest of the defence, public safety, public morality or public health.

Flowing from the above exceptions to the exercise of the right to freedom of expression and the press, it is germane to state that other statutes made pursuant to the Constitution have provided regulations for dealing with fake news and hate speech. Hate speech is akin to defamation while fake news is akin to misrepresentation. Thus, the duo are not entirely new phenomena in our legal jurisprudence. However, in the light of recent technological advancement brought about by the computer age, whether the existing statutes can sufficiently tackle the menace of hate speech and fake news is another question altogether.

“Rather than enact a totally new legislation on fake news and hate speech, our existing laws should be improved upon by ensuring that appropriate regulations regarding opening of Facebook, twitter, skype, etc. accounts are put in place.”

It is incontrovertible that Nigeria already has laws that are sufficient to combat the menace of fake news and hate speech, save for the current technological explosion. Therefore, the proposed hate speech bill pending before the National Assembly should aim at up-dating the existing laws to cover any gap arising from the recent technological advancement. Some salient provisions of the existing laws are examined hereunder:

Cyber Crime (Prohibition, Prevention Etc.) Act: This is one of the most recent Acts of the National Assembly. Section Sections 24(1)(a) of the Act provides:

(1) Any person who knowingly or intentionally sends a message or other matter by means of computer systems or network that:- is grossly offensive, pornographic or of an indecent, obscene or menacing character or causes any such message or matter to be sent; or he knows to be false, for the purpose of causing annoyance, inconvenience, danger, obstruction, insult, injury, criminal intimidation, enmity, hatred, will or needless anxiety to another or causes such a message to be sent: commits an offence under this Act and shall be liable on conviction to fine of not more than 7, 000, 000.00 or imprisonment for a term of not more than 3 years or both such fine and imprisonment.

26 (1) Any person who with intent:- Distributes or otherwise makes available, any racist or xenophobic material to the public through a computer system or network; Threatens through a computer system or work: persons for the reasons that they belong to a group distinguished by race, colour, descent, national or ethnic origin, as well as, religion, if used as a pretext for any of these factors.

A group of persons which is distinguished by these characteristics…”

Terrorism (Prevention) Act: This Act equally provides for the offence of incitement. It provides that any person who knowingly incites or promotes the commission of a terrorist act, commits an offence and is liable on conviction to imprisonment for a term of not less than twenty-years.

Criminal Code: Defamation can constitute both criminal offence and civil wrong under the law of tort. The publication of words that can cause hatred, contempt, ridicule or damage to reputation or profession of a person(s) to the hearing of such person(s) or a third party without justification is a criminal offence, so also breach of peace, inciting statements and assaults are provided for in the criminal Code which operates in Southern part of Nigeria.

Libel Act: The Court of Appeal in the case of Arthur Nwankwo v State, the Justices of the Appellate Court unanimously held that a public officer who feels disturbed by any publication can sue for libel in civil court, in view of the freedom of expression.

Electoral Act: Under section 95 of the Electoral Act, no political campaign or slogan shall be tainted with abusive language directly or indirectly likely to injure religious, ethnic, tribal or sectional feelings.

From the provisions of the above laws, one is not left in doubt that the laws cover both the criminal and civil aspects of hate speech and fake news. The only issue with the laws is that since they were made before the rapid growth in technology, certain aspects of them need to be upgraded or updated to meet up with the current realities of the present society.

Rather than enact a totally new legislation on fake news and hate speech, our existing laws should be improved upon by ensuring that appropriate regulations regarding opening of Facebook, twitter, skype, etc. accounts are put in place. This will avoid a situation where someone will open a fake account for purposes of hate speech and fake news. This can be achieved through the instrumentality of amendment of the relevant provisions of the existing laws.

Closely linked to the above is that Media regulatory bodies such as the Nigerian Communications Commission (NCC), the Nigerian Broadcasting Corporation, amongst others, must evolve and strictly enforce regulatory standards that will promote decent and constructive speech in Nigeria.

Media Organizations and Practitioners should be held accountable for negligence where fake news and hate speech are disseminated through their negligence or breach of professional etiquette.

Our laws should be amended by prescribing stiffer penalties for perpetrators of hate speech and fake news.