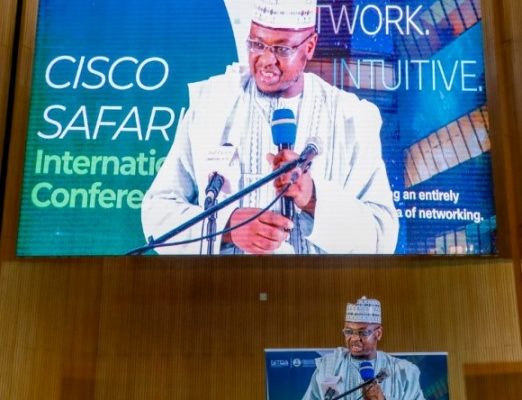 The Minister of Communications and Digital Economy, Prof. Isa Ali Ibrahim Pantam, has applauded National Information Technology Development Agency (NITDA) and Cisco Network Academy for their support of academic institution to provide digital skills among thousands of students in universities, polytechnics and colleges of education.

The training has further helped the Federal Government to drive its digital economy agenda to produce employers of labour and end un-employability in the country.

Pantami made the commendation while delivering a keynote address at the Cisco Safari International Conference 2022 with the theme: “Digital Skills in the 4th Industrial Revolution, the Impact on National Development” inside the Digital Economy Complex, Abuja.

Organised by NITDA in collaboration with Cisco, the event is an annual convergence experts discussing the progress of Cisco Academy in mentorship, career development programmes in the country and how to strengthen the partnership it has enjoyed with the NITDA over the years.

Pantami described the theme as reflecting the present administration’s foresight in aligning with global trends. He stated that digital skills and the 4th Industrial Revolution (4IR) have been captured in the National Digital Economy Policy and Strategy (NDEPS) as key pillars in diversifying the country’s economy.

His words: “If you look at our National Digital Economy Policy and Strategy for a digital Nigeria 2020- 2030 which was unveiled by President Muhammadu Buhari on the 28th of November 2019, you will discover that these two components of the theme have been effectively mentioned and captured in the policy under pillars number 2 and 7. Pillar number 2 is digital skills and literacy while pillar number 7 is digital society and emerging technologies.”

The world is already in the 4IR, Pantami said adding that emerging technologies such as the Internet of Things (IoT), artificial intelligence (AI), robotics, blockchain technology among many others have replaced the existing emergence of computers, worldwide webs and the internet which was experienced in the 3rd Industrial Revolution.

He said: “There is a clear line of demarcation between general Information Communication Technology and emerging technologies. The world is being converted to a virtual world today to the extent that we are so much addicted to the virtual world and we know the virtual world more than how we know and interact with the physical world. We are already in the 4th Industrial Revolution”.

The 4IR will impact significantly on global economies and will ensure the dominance of a knowledge-based economy over a resource-based one, the minister said while disclosing that ICT and other digital services contributed 17.9% to the Nigeria’s economy as against 8% by Oil in the second quarter of 2021.

“The 4th Industrial Revolution is about knowledge and not natural resources. Organisations like Microsoft, Apple, SpaceX and Amazon have taken prevalence over organisations like Shell, Mobil and Chevron,” the minister noted while assuring Cisco and other stakeholders of continuous government support.

Giving assurances of the government’s support, he said “Of recent, we have had an agreement with Huawei and Cisco to establish a minimum of 300 academies in Nigeria and to train a minimum of 30,000 citizens on advanced training. In addition to this, we have another agreement with Microsoft in which 5 million citizens are going to be trained on ICT, particularly in the area of artificial intelligence”.

While giving his special address earlier, the Honorable Minister of Education, Mallam Adamu Adamu commended Pantami on the unprecedented achievements he recorded in sustaining a Digital Nigeria.

“There is need for us to improve the existing teaching methodology in our schools and our commitment is to provide digital skills for our students as demonstrated in our policies, strategies and initiatives”, said Adamu. He was represented by the ministry’s Director for ICT, Mr. Gbenga Oderemi.

Director General of NITDA, Kashifu Inuwa Abdullahi, stated that the conference reflects the strong ambition and commitment of the nation’s leadership to transform Nigeria into a knowledge and skills-based economy.