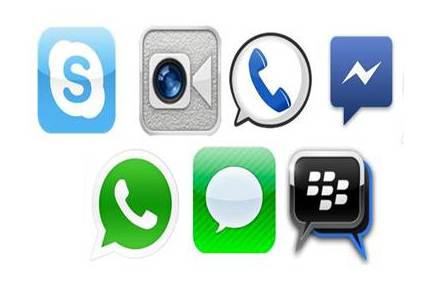 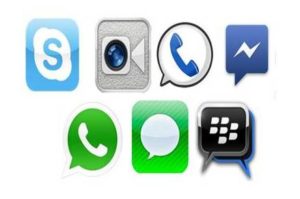 Are mobile operators having sleepless nights over the rising use of over-the-top (OTT) apps or services by consumers? Definitely YES! Competition is thickening for operators, becoming fierier and market optimization does not mean that profit is surging rather it means more consumers are increasingly plugging into zillions of messaging and calls apps bypassing the billing machines of telcos.

What are OTT apps or services? Depending on your environment and how exposed you are online, OTT include Whatsapp for voice/video calls, Skype, Viber, iMessage, Facetime for voice/video calls, Facebook Messenger for voice/video calls, Xbox 360 or World of Warcraft for gaming and a host of uncountable others. You have probably used them in recent time to make crystal clear calls to other users without ‘paying an extra dime.’  As one expert puts it: “Any service you are receiving over the internet that is not provided directly by your ISP/telecommunication provider is an OTT service.”

Telcos revenues from voice and SMS are dipping as Facebook calls, WhatsApp messaging/calls, Viber, and Skype gain popularity across Africa. Because telcos can, as yet, not charge OTT operators for tapping their network, they are exerting pressures on regulators to do something.  Telcos want to be allowed to charge OTT operatorsfor the use of their infrastructures. In the long run, they may be forced to charge consumers higher for data services in a market that is still low on bandwidth and quality of service (QoS).

Licenced mobile operators pay a premium to deplore services. Apart from licence fees and taxes, they pay for spectrum usages which add to their portfolio of expenditure to provide services to their subscribers. OTT operators, on the other hand, deliver SMS and call services over IP (internet protocol) for free riding on the back of the licensed operators. Because OTTs are unlicensed, they incur little or no cost but claim revenues from multiple, dynamic sources that include online advertisements, etc. Licensed operators think this is unfair. They want to be allowed to start charging OTTs for tapping into their networks.

OTT is a manifest phenomenon of technology convergence. In a research on OTTs, authors Joshi Sujata, SarkarSohag,DewanTanu, DharmaniChintan, PurohitShubham and  Gandhi Sumit, say:“the telecom industry has been one that has had to deal with a continuously changing business and technology environment more than most other industries over the past half century. Traditionally the principal revenue streams for telecom operators have been voice and messaging (SMS) with data coming in at a far third till recently.

“But while telcos had been quick to react to previous game changing developments such as the internet explosion and the emergence of cellular mobile communications in the 1990s, they seem to have been caught napping in the face of the newest challenge to their revenues, Over The Top (OTT) service providers. The growing impact of OTT services on telcos’ voice and messaging revenue is a widely accepted phenomenon. Their impact on mobile data traffic and telco data revenue is also areas that have been acknowledged as critical points for consideration.”

In South Africa, a raging debate over whether OTT services are unwholesomely cannibalizing telcos market shares nay profits could kick-start formal regulation of OTT services. The questions would then be how?  Regulating insurgent technologies in the increasingly converging ICT environment has posed both a challenge and something of a mystique to regulators.

The South Africa’s Portfolio Committee on Telecommunications and Postal Services is already considering whether a policy intervention for regulating OTT services would be feasible. The committee would examine the impact OTT services have had on competition and alsoconsider “regulatory interventions on the guidelines to regulate OTTs.”

For both operators and regulators, the contention rests on how best to tame OTTs using market dynamics and regulatory limits. Stopping OTTs all together is impossible. Spelling rules for OTTs has its own dilemma – what formal guidelines would work for a service model that is completely non-conventional and aptly put: non-conforming?

While the debate rages, one sore fact stands out: Voice and SMS revenue by telcos are in decline – No thanks to OTTs. In 2011, Ovum estimated the decline at $13.9 billon.  While the loss was marginal in 2011 and majorly featured in advanced markets, the threat has widen to include matured or larger markets that include Nigeria, India and South Africa among others. Telcos face real threat as mobile internet becomes a feature of service to huge numbers of subscribers.

One recent report by Credit Suisse says telcos risk a 30% loss in revenue in these markets and could rise to 50% overtime.

In market where telcos have witnessed significant surge in income due to huge number of subscribers,they face greater risks in huge revenue loss due to increasing cannibalisation of calling and SMS services by OTT operators. Nigeria, India and South Africa are particularly remarkable. As at November 2015, Nigeria’s active mobile phone subscribers is over 152 million.As at December 2015, India passed the one billion mobile users mark and has over 236 million mobile internet users to become second only to China, globally. In South Africa, mobile subscribers exceed 59 million and data subscriptions are in excess of 26 million. The rising influence of Whatsapp, Skype,etc would hurt revenue “unless, of course, telcos remodel their operation,” says Lagos analyst Dele Aroguntade.

While many dominant operators are already pressuring regulators to protect their revenue from cannibalization, some others would rather the regulator adopt a much open and dynamic approach that could see telcos partnering with OTTS in a way that should bring billing to the OTT environment for  telcos and OTT operators to share. One interesting online report says:  “Cell C [third operator in South Africa] has accepted that OTT is inevitable, moving to embrace the communication evolution rather than push back, while Vodacom and Telkom [the biggest operators in South Africa] have chosen to portray it as a threat to their core business.”

Ovum analyst Richard Hurst quoted by Myles Freedman  in a report on OTT published by Africa News  says bids to regulate OTT will find “very little sympathy with the general public” and notes the pushback against the service shows operators are moving to stop OTT instead of innovating to deal with the pain. He says dominant players have become rigid in their thinking, just like Telkom [South Africa] was when cellular services were launched 20 years ago. “The large players are behaving more and more like the incumbent.”

Regulators in both Nigeria and Ghana, two of the most proactive markets in West Africa, would rather watch to see how events unfold.  “OTT posed a peculiar challenge,” said one senior official at the Nigerian Communications Commission (NCC) in Abuja. “But it is a challenge that embodies the dynamism of the telecom industry and so the ideal thing is to watch how market operators and other players react to the phenomenon.” Aroguntade argues that telcos face a losing battle if they try to eliminate OTTs, he would rather they remodel their service delivery even if it entails partnering with OTT players and also explore other revenue opportunities within their existing network.

There is no clear figure on what traditional telcos are losing to OTTs in Nigeria or how significant OTTs have impacted on the revenues of the four GSM operators: MTN, Globacom, Airtel and Etisalat. What is clear is that OTT services are gaining grounds and if the trend elsewhere is anything to go by, telcos here will sooner than later feel the heat. “Soon, they will take severe hits and mount considerable pressure on the NCC. OTT will become a much serious issue once broadband or data becomes a more enriching experience here,” said technology convergence specialist, Roland Chibere.

In China and India, OTT is already a big ache.  As one report shows: “Free messaging apps were estimated to cost telcos US$1.2 billion last year in India.” This could increase to US$3.1 billion in 2016 as Indian mobile users sent fewer SMS messages on traditional telcos. In nearby China, carriers in China are seeing drops in voice calls and SMS revenues as more of their subscribers turn to WeChat and other messaging apps. “It’s not a matter of if but when. We have seen concerns bitterly expressed in South Africa, a smaller market than Nigeria in terms of subscribers’ base,” said Chibere.

“Stopping OTTs all together is impossible. Spelling rules for OTTs has its own dilemma – what formal guidelines would work for a service model that is completely non-conventional and aptly put: non-conforming?”

“There is no clear figure on what traditional telcos are losing to OTTs in Nigeria …. What is clear is that OTT services are gaining grounds and if the trend elsewhere is anything to go by, telcos here will sooner than later feel the heat.”