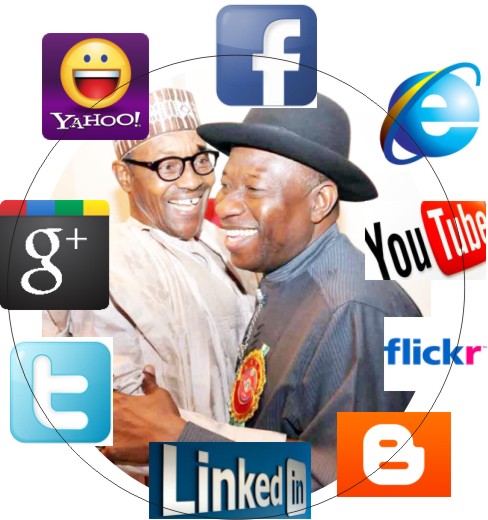 The National Human Rights Commission (NHRC) is worried. Hate and divisive speeches dominate political rallies as the elections heat up a political space already notorious for its violence. Voting will take place February 14 across the country. Hate and divisive speeches take on more frightening dimensions online via social media, notably Facebook, Twitter and Youtube by cashing in on the fault-lines: religion and ethnicity.

If you have been active on the social media scene in the last one month, chances are you have either initiated a hate speech or responded to one.  IT Edge News.Com captured this trail published by online media, pointblanknews.com.

“It is a sin islamically, for a Muslim to support a non-muslim for leadership. We will get u people one by one, you are very stupid. We will get you soon and you PDPNYF…will regret it insha Allah” Imam Sadiq tweeted @imamsadiq123…In a back and forth with the PDP Northern Youths Forum, in an apparent warning of a dire consequences if a Northern Hausa Muslim is not elected President in 2015.

“Attahiru Abdulkareem posted on his Facebook page” Truth is bitter. People like you support GEJ are the one (sic) that don’t want dis country to progress. U all should (sic), locked in a room and bomb you all.”

“The above and many more are what has become of the 2015 Presidential election campaign as the country experiences a major polarization along ethnic and religious lines. Sources told Pointblanknews.com that hate speeches and anti-Christian messages against a Christian Presidency freely described as “infidel” have been recorded in tapes and circulated to Muslims in the North. The hate messages are being listened to by artisans, traders and people visiting places such as markets, Mosques and religious houses.”

No part of the country is insulated from the hate twits or Facebook posts.  A quick check on pro Goodluck Jonathan supporters equally paints an eerie consequence of voting for “feudal” Mohammadu Buhari, the APC presidential candidate. Most experts agreed on one thing to cite pointblankness.com again: the specter of 2011 is here with us and will be reenacted in 2015. “In 2011 [in parts of the north], armed youths went from house to house in murderous rage, hacking, looting and burning. Mostly affected were southerners, including several members of the NYSC on election duty.”

The NHRC has called the attention of politicians to the provision of Sections 95 and 96 of the Electoral Act which prohibits direct or indirect abusive languages in political campaigns. The Act condemns the use of languages capable of provoking violent reactions or emotions or the use or threat of violence in campaigns.

Sections 95 of the Electoral Act specifically prohibit in political campaigns “language directly or indirectly likely to injure religious, ethnic, tribal or sectional feelings” or which is “abusive, intemperate, slanderous, or base” or contains “insinuations designed or likely to provoke violent reaction or emotions”.

But politicians have simply ignored these provisions. As reported by online media, Premium Times: “In October [2014], the Katsina State governor, Ibrahim Shema, was caught in a video urging his supporters to reprise any provocation by the opposition and to crush them like “cockroaches.” He asked the crowd what to do if they found the nocturnal insect in their apartments. The crowd chorused “Kill them!”

“Crush them!” the governor responded, agreeing with the crowd. The same kind of hate speech was used by the Hutus against the Tutsis prior to Rwanda’s 1994 pre-genocide. While the 1994  genocide in Rwanda was aided by hate speech via radio broadcast, the deadly violence that followed the Kenya elections of 2007 which took  at least 1,200 lives was stirred by hate speeches via SMS. During the 2013 elections, Kenyan authorites on the alert for hate twits and such other messages that could stir violence via social media.

As Jideofor Adibe rightly notes in his article on Ethnicity, Hate Speech And Nation-Building: “Hate speech employs discriminatory epithets to insult and stigmatize others on the basis of their race, ethnicity, gender, sexual orientation or other forms of group membership.  It is any speech, gesture, conduct, writing or display which could incite people to violence or prejudicial action. There are individuals and groups in this country who openly relish the freedom to rain insults and profile others by appropriating to themselves the role of ethnic and religious champions. The problem is that hate speech is often the gateway to discrimination, harassment and violence as well as a precursor to serious harmful criminal acts. It is doubtful if there will be hate-motivated violent attacks on any group without hate speech and the hatred it purveys.”

Take a close look at the hate speeches online (See the sample in this report), hate speeches are designed to ultimately prod the respondents to act out violence or take non-legal actions at certain political targets by whipping up ethnic or religious sentiments.