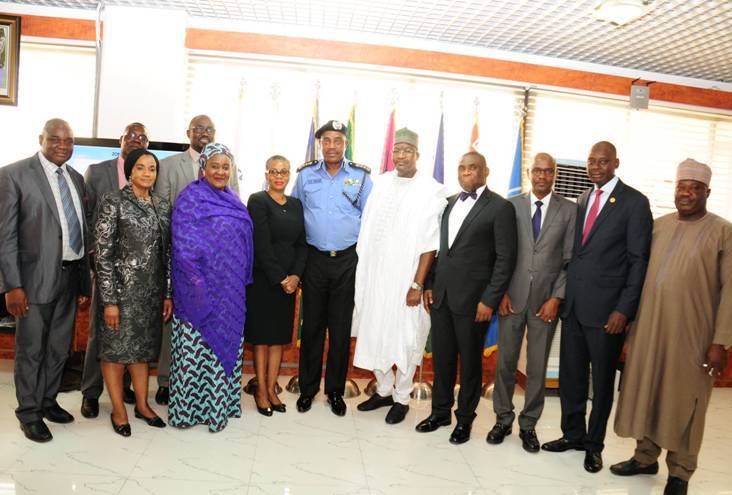 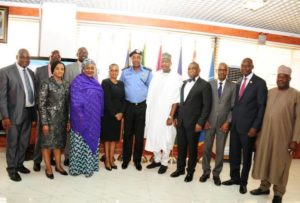 The Executive Vice Chairman of the Commission (EVC), Prof. Umar Garba Danbatta, together with senior management staff during a courtesy visit to the Inspector General of Police (IGP), Solomon Arase, at the Police Force Headquarters, Abuja on March 1, 2016.

Executive Vice Chairman of the Nigerian Communications Commission (NCC), Prof. Umar Garba Danbatta, has assured the West African Telecommunications Regulatory Assembly (WATRA) of the NCC’s support.  He said the NCC, having been involved in mid-wifing and birth of WATRA will continue to lend a helping hand to the activities of the ECOWAS body.

Danbatta spoke when he received the Executive Secretary of WATRA, Alhaji Maman Laminou in his office in Abuja recently. He told the WATRA’s boss that the NCC broadband plan will cater for everybody including those in the rural communities, adding that the NCC hopes to leverage on WATRA’s expertise to actualise the recently unveiled eight-point agenda whose focus is on the turnaround of the telecommunications sector.

Danbatta said that the National Broadband Plan (NBP) will be pursued vigorously and that attaining the 30% minimum coverage by 2018 is possible. In his remarks, Mr Laminou congratulated Danbatta for his appointment as EVC of the NCC and pledged the support of WATRA to NCC at all times.

Laminou said that WATRA was in the process of harmonising the roaming activities of the Economic Community of West African States (ECOWAS). He said guidelines are being developed for a seamless interconnection and roaming of telephone users in West Africa. He said this and many others will form discussions at the yearly general meeting in April, 2016.

Laminou said that WATRA has been taking its activities to several member countries in the last year or so. Some of these activities include Technology Conversion (in Senegal) and has been involved in the campaign for infrastructure sharing among operators. WATRA has also been involved in capacity building for members on Quality of Service (QoS). The WATRA team was received by the EVC in company of the Director, Public Affairs, NCC, Mr Tony Ojobo, Director, Human Capital and Infrastructure Group, Hajia Maryam Bayi and Chief of Staff to the EVC, Mr Usman Malah among others.

Meanwhile, Danbatta has tasked the Inspector General of Police (IGP), Solomon Arase in Abuja to assist in protecting telecoms infrastructures.  He spoke during a courtesy visit to the IGP. He said considering the pivotal role telecommunications plays in the lives and economic wellbeing of any country, no effort should be spared in protecting the infrastructure and platforms of the industry.

Danbatta said the NCC is concerned about increasing cases of illegal sealing up of telecoms Base Transceiver Stations (BTS) across the country by various persons, including organizations, communities, agencies of the Federal State and local government at times using law enforcement officers. He lamented that apart from the actions being illegal, they also violate Criminal Justice (Miscellaneous Provisions) Act, CAP C39, laws of the Federation of Nigeria, 2004.

Sealing up of Base Stations also has its social implication that is cutting off subscribers from communicating thereby degrading quality of service, which is already a major concern.

Acts of willful destruction of telecoms infrastructure, cutting of fibre optics and general vandalism have become very worrisome, hence the proposal for the institution of a critical infrastructure law that will require the police to monitor and protect public infrastructure.

“While we seek your support for urgent actualization of this law, we wish to implore you to see to the use of the current provisions of the law to ensure that individuals found to be engaged in willful destruction of telecoms infrastructure are timely prosecuted,” Danbatta pleaded with the IGP.

Arase who expressed the readiness of the Force to work with the Commission immediately proposed the setting up of joint teams, drawn from the Police and the Commission which will handle telecom related cases.