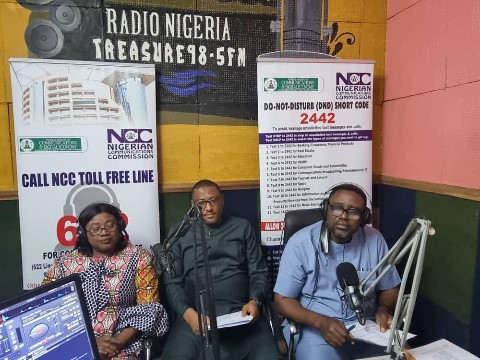 The Nigerian Communications Commission (NCC) has asked Mobile Network Operators (MNOs), their licensed agents and telecom subscribers to always comply with the Subscriber Identity Module (SIM) registration, activation and replacement procedures as set out in the Revised National Identity Policy for SIM Registration.

The commission made the request during the 6th Edition of the Telecom Consumer Town Hall on Radio (TCTHR), a radio-based interactive consumer outreach programme of the commission, broadcast under the auspices of NCC Digital Signature, the commission’s flagship radio programme.
The programme, which had NCC officials and representatives of MNOs in attendance in the studio, was aired live on Treasure FM 98.5, Port Harcourt, Rivers state, over the weekend with the theme: “Understanding SIM Replacement Procedures.”
Speaking during the radio sensitisation programme, the Director, Consumer Affairs Bureau, NCC, Efosa Idehen, said while operators are to ensure strict compliance when registering their customers, the SIM card owners too have the responsibility to be vigilant to ensure that they are properly captured either for new SIM activation or SIM replacement.
“As the telecom regulator in Nigeria, our role is to enforce compliance with the extant SIM activation and replacement procedures in order to avoid problems that may arise in the event of stolen, lost, damaged SIMs or the need to upgrade SIM cards,” he said.
Idehen underscored the significance of SIM registration to personal and national security, and asserted that compliance with the stipulated procedures for SIM replacement will forestall identity theft, fraudulent SIM swap and other deceitful activities that can be carried out with a SIM card.
He informed the listeners that, in accordance with the Revised National Identity Policy for SIM Registration, all SIM replacements shall be undertaken by the service providers or their licensed agents in a controlled environment to eliminate the recurrent complaints of inconclusive SIM replacement procedures. He said such experiences have resulted in subscribers being defrauded by cyber fraudsters.
Idehen also advised the telecom consumers to be wary of fake SIM registration agents purporting to be working for MNOs with intent to defraud unsuspecting subscribers. He said one of the antics of such agents is to ask for the one-time password (OTP) forwarded to the consumer for activation of the SIM, especially after the SIM replacement process has been done. He warned telecom consumers to be wary of such scams.
Addressing the requirements for SIM replacement, the Director, Public Affairs, NCC, Dr. Ikechukwu Adinde, said the use of National Identification Number (NIN) is compulsory in addition to all other criteria stated in the SIM Replacement Guidelines. He declared that the provision is stipulated in the Revised National Identity Policy for SIM registration.
Adinde, who was represented by the Port Harcourt Zonal Controller, Venny Eze-Nwabufoh,   explained that using the NIN for SIM replacement is beneficial as it helps in identifying the real identity of a mobile phone user, limiting identity fraud, other network related crimes as well as improving national security. The Director Public Affairs also stated that the public sensitisation on SIM registration generally is in line with the obligation of the Commission to ensure effective implementation of the Revised National Identity Policy for SIM Registration.
Conclusively, both directors at the commission informed the listeners that the NCC is saddled with the responsibility to oversee the implementation and management of the National SIM Registration Database. The NCC senior executives explained that one of the obligations of the Commission is to ensure the implementation of the policy on revised national identity for SIM registration, and to have oversight of its strategies, standards, guidelines as well as frameworks in order to improve the identity and security management of mobile phone subscribers in Nigeria.