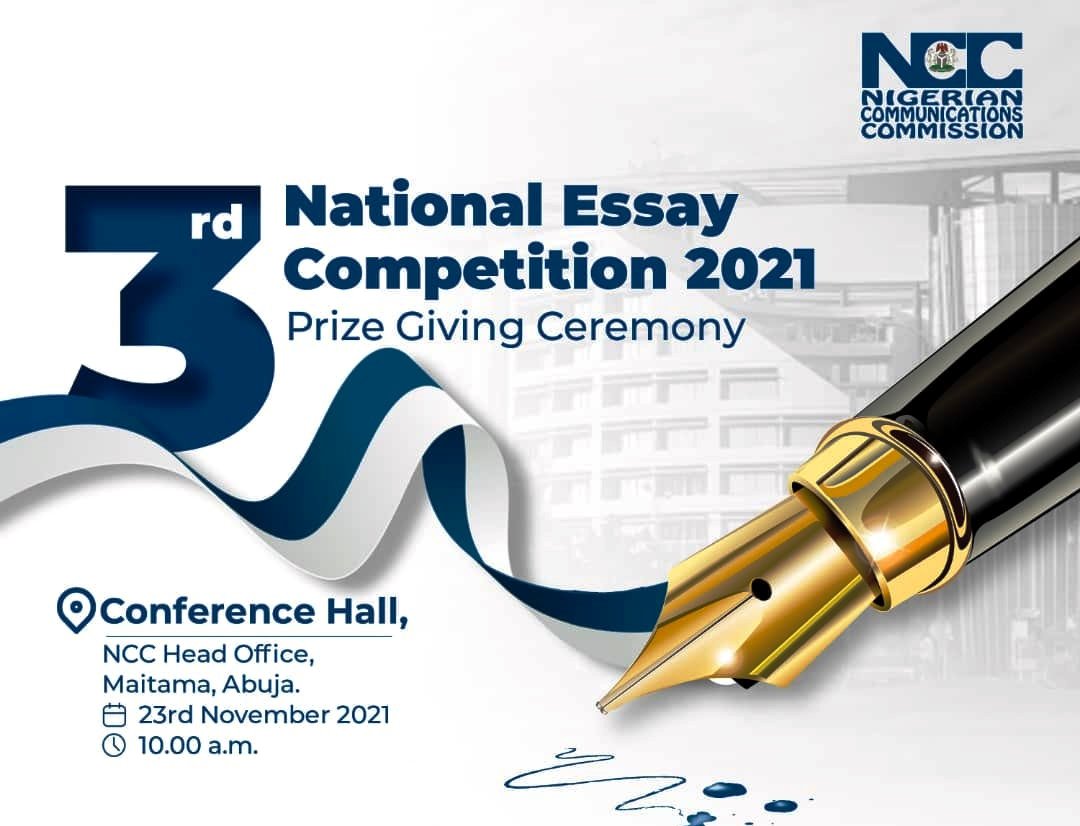 0
The Nigerian Communications Commission (NCC) has committed over N200 million into the promotion of research and development (R&D) in order to drive innovation in the country’s telecommunications sector, Executive Vice Chairman and Chief Executive Officer of the regulatory body, Prof. Umar Garba Danbatta, has said..
Danbatta spoke during the prize presentation ceremony of the 2021 NCC National Essay Competition this week in Abuja. The students with the winning essay entries received over N1m to sign off the 2021 competition.

At the event which marked the 3rd edition of the annual competition organised by the commission, Danbatta said the commission has invested modestly in research grants, instituted professorial chairs in universities across the country, supported tech startups, and sponsored national essay competitions and many more social investments in order to ensure synergy and linkages among industry, the academia and the youth.
Over 2,000 entries were received from 97 public and private tertiary institutions for the competition in which Esther Oluwabukola Gbeja, a 600-Level student of Veterinary Medicine at the University of Ilorin, was declared overall winner. Gbeja received a cash prize of N500,000.00, a laptop, and a printer; while the first runner-up, Moses Nosa Edosa, a final year student of Accounting at the University of Port Harcourt, received a cash prize of N300,000.00 only.
Two second runners-up emerged from the competition to pick the third prize. MarcPatrick Efevuriri Efeni, a 200-Level student of Cybersecurity at the Airforce Institute of Technology, Kaduna; and Nasiru Abdul Karim, a 400-Level student of Computer Engineering at the Obafemi Awolowo University, Ile-Ife, both came third having scored same number of points. They both received cash prizes of N200,000 each. The EVC said NCC gladly accommodated the additional prize due to the tie in the third place, as a mark of encouragement.
According to Danbatta, the topic for this year’s essay competition, “5G Technology: Opportunities & challenges”, was carefully chosen to ensure that the youths have a good understanding of the new technology. He said Nigeria’s vibrant youth populace stands to benefit massively from the deployment of 5G technology, which the Commission is set to launch in 2022.
The NCC CEO said the commission initiated and has maintained the annual essay competition to stimulate the interest of Nigerians especially the young people, to contribute to efforts in driving innovation in the technological ecosystem of Nigeria. “It is on this premise that NCC took the step to encourage Nigerian students to remain pro-active and partake in the national competition that challenges students to be competitive and engage their best efforts,” he said.
While emphasising the critical importance of communications as the foundation for the technological  development of society and its role in the provision of vital infrastructure for national security, Danbatta highlighted the need to invest in research programmes as observed in advanced nations, where a lot of resources are channeled into R&D.
Prof. Danbatta seized the opportunity provided by the event to reiterate the assurances of the Commission to Nigerians that 5G technology will expand the mobile ecosystem into a new realm and the impact will be felt in various sectors of the economy.
The Chairman of the 3rd NCC National Essay Competition Committee, Edoyemi Ogoh, who is also a Deputy Director in the Commission’s Technical Standards and Network Integrity Department, commended the EVC’s effort in recognising the academia as a key stakeholder in the development of the communications sector, and in encouraging that critical sector to have a natural connection with the industry.
Ogoh further said that the Commission “knows the importance of innovative thinking in the growing ICT industry in Nigeria and as such, this has made the Commission to engage youths in various tertiary institutions across the nation to compete in essay writing on 5G technology.”
Also speaking at the event, Director, Public Affairs at the NCC, Dr. Ikechukwu Adinde, said the essay competition is one of the most important initiatives the Commission, and expressed his delight at the ability of the winners who have demonstrated vast knowledge on the subject matter during their presentation. Adinde also emphasised the influence of the competition in the stimulation of the minds of the target audience and the creation of positive awareness to debunk misconceptions about the 5G technologies.
The Director Public Affairs said, the outcome of the competition is an encouragement to the NCC Management to continue to support the national essay competition while ensuring that the Commission sustains such programme. He said the results are evident today as the NCC has, through the essay contest, produced four ambassadors of 5G. “These youths can go out and engage their peers about 5G, its benefits, opportunities and address the negative preconceptions about the 5G network,” Adinde said.
The essay competition was initiated by the NCC to deepen awareness and knowledge of telecommunications stakeholders in the country, especially the young people. Interestingly, every successive year, the competition is marked by massive responses in the number of essays submitted by students. Though the Commission has been able to organise three of such national essay competitions, the resultant social and emotional equity has had impressive and quantifiable values on the Commission as a leading Nigerian public sector brand.