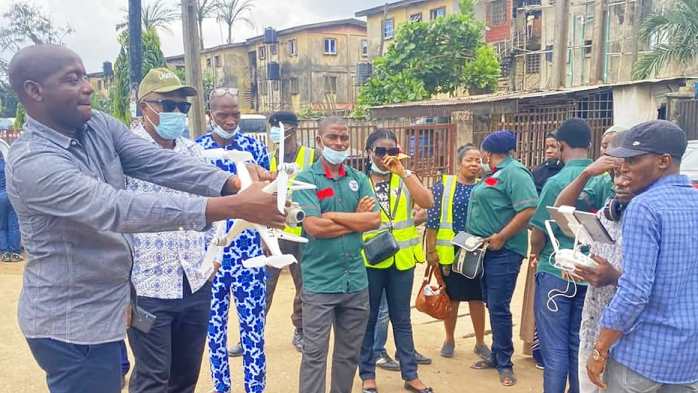 “The Lagos State Planning and Environmental Monitoring Authority (LASPEMA) has started the mapping of informal business sector on setbacks and other incidental open spaces in the State with the use of drones,” notes a statement issued on Monday in Lagos by the government agency.

The drones were deplored over the weekend to monitor poorly organised businesses for improvement at Abule-Egba to Ojokoro Housing Estate and part of Berkeley Road, off the Lagos-Abeokuta Expressway.

According to the General Manager of LASPEMA, Tpl. Daisi Oso, “there is a need for the informal business sectors in Lagos to be more organised with the establishment of comprehensive data on their activities.”

Lagos is Nigeria’s commercial capital and is home to more than 20 million people and accounts for 50% of operators in Nigeria’s informal business sector.

Oso, who led the technical crew for the aerial capture of the setbacks, said images captured with the drone will be downloaded and converted to measurable metrics for better site evaluation, beautification and improvement of the aesthetics of Lagos urban space.

He said the agency was working toa acquire more equipment such as Global Positioning System (GPS) and drones with digital cameras for capturing the colossal damage done to all the setbacks occupied by the people of the informal sector, comprising automobile sellers, car wash operators, iron rod sellers and block industries amongst others.

He added that the initiative will make provision of support lines for SMEs as well as beautification of Lagos sustainable in line with the state government’s THEMES agenda. THEMES is the acronym for Traffic Management and Transportation, Health and Environment, Education and Technology and is targeted at making Lagos a 21st century Economy fostered on Entertainment & Tourism, Governance & Security.

The General Manager said the resultant effect of a robust interpretation of data collected will enhance the necessary interface with other sectors of the economy or government institutions, one of which is linking the informal sector with Primary Health Centres (PHC) close to their areas of operations.