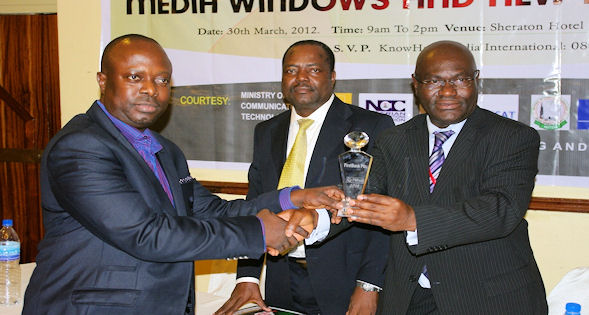 By MARTIN EKPEKE
With Nigeria’s commercial capital Lagos gearing to go cashless in line with the financial regulator’s plan to reduce heavy cash dependency, England based ICT industry analyst, Juniper Research have predicted that in Africa and most especially in Nigeria’s relatively new mobile money market, 1 in 10 mobile phone users will pay bills through the mobile phone by 2016.

Nigeria’s Central Bank of Nigeria (CBN) has tipped April for the start of a nationwide shift to cashless transactions starting with Lagos, a move many have commended in spite of glitches including poor Internet connectivity and still fewer payments terminals in several commercial points in the city of some 18 million people. According to the industry analysts, about 20 million Nigerians are expected to be embraced into the formal banking system via mobile money over the next few years. In November 2011, the United Nations Conference on Trade and Development (UNCTAD) had disclosed that 40 million mobile money users currently exist in Africa.

Agreeing with Juniper Research, the Central Bank of Nigeria through its Head of Shared Services, Chidi Umeano in a paper he delivered in Lagos, at the 5th IT Edge West Africa Convergence Forum, pointed out that various enablers will be required to ensure that m-payments play the desired catalyst role in financial inclusion. He stated that to drive the growth, continuous communication and awareness, consumer protection, dispute resolution, enhanced security and anti-fraud measures will not be enough to carry the users along, but there must be policy oversight, consistency, thoroughness, elimination of loopholes on the part of the players to ensure enforcement and monitoring of performance measurement.

With this disclosure, there exists a huge opportunity for Nigeria to dominate Africa’s mobile money payment landscape. Nigeria accounts for the highest number of mobile connections in Africa with 93 million out of the 650 million mobile subscribers on the continent as at January 2012 meaning that almost two of every active six mobile phones would be found in Nigeria.
Also, Nigeria has only 25 million bank accounts out of a population of 167 million, given these statistics; there is a margin of between 20 million and 35 million unbanked mobile phone subscribers. If only ten percent of these unbanked mobile phone users subscribe to mobile banking, the scheme would rake in millions of Nigerians into the formal banking system in the next few years.

Mobile phone banking is gaining considerable footing in Africa, thanks to the convergence of technology, media contents and the exploitation of advanced functionalities of mobile phones which is expected to fuel the growth. Within the growth in mobile money space, convergence is the strong influences changing the shape of the industry. Buyers have an increasing array of channels, many payment types and no single way to pay for what they purchase. People are leveraging on technological devices to pay for bills even when out of the country because there are interoperability between all channels and services. That is convergence.

The mobile phone has become part of life in Africa, and has considerably changed the way people goes about their private and business life. Change is mobile, consumers have increasingly engaged in mobile lifestyles; so in Nigeria’s continuously growing mobile market, a greater percentage of mobile banking customers will pay their bills via a mobile device by 2016. The implication is that even card-based payments beginning to gain foothold in Nigeria may soon give way to mobile phone-payment platforms, argued Mr. Chuma Ezirim, Group Head, e-Business, First Bank of Nigeria Plc in his own paper at the 5th IT Edge West Africa Convergence Forum titled: ‘Emerging Payment Landscape’
The end of payment cards is coming

Quoting industry statistics, Ezirim said more people have access to mobile telephony than electricity. The number of mobile phone subscribers would hit six billion people in 2013 and about 80% of the world population live within cellular networks meaning that mobile payment platforms hold stronger attraction in terms of ease of use and coverage. Using the mobile device to make payment is the trend all over the world because it is convenient, it is something you can use at any point and anywhere, an advantage which other electronic channels don’t have.

For ATMs and PoS, there is need for you to leave your home and office to perform a transaction, and for the web, you will need an internet connection. The fastest way to promote financial inclusion for now can only be through the mobile phone. Though, lack of awareness from the part of the mobile money companies to the rural dwellers which constitute a greater percentage of Nigeria’s phone users may hinder the exponential growth expected from the industry, the market looks promising for potential players.

All that is expected from stakeholders is to build a shared agent network to serve all the stakeholders, and since agency is the heart of mobile financial services, there is a need to source, develop, train and deploy agents on a shared basis because the growth and development of mobile payments especially in rural communities, is largely dependent on a solid agent network.
Since licenses were given to companies by the Central Bank of Nigeria to operate mobile money in Nigeria, the industry has witnessed a number of product and service launch from GTBank (in strategic partnership with MTN and Fortis), United Bank for Africa, Stanbic IBTC, Pagatech, E-transact, Airtel in partnership with FirstBank. But the like of Paycom, M-Kudi, Eartholeum and Monetise are yet to launch.