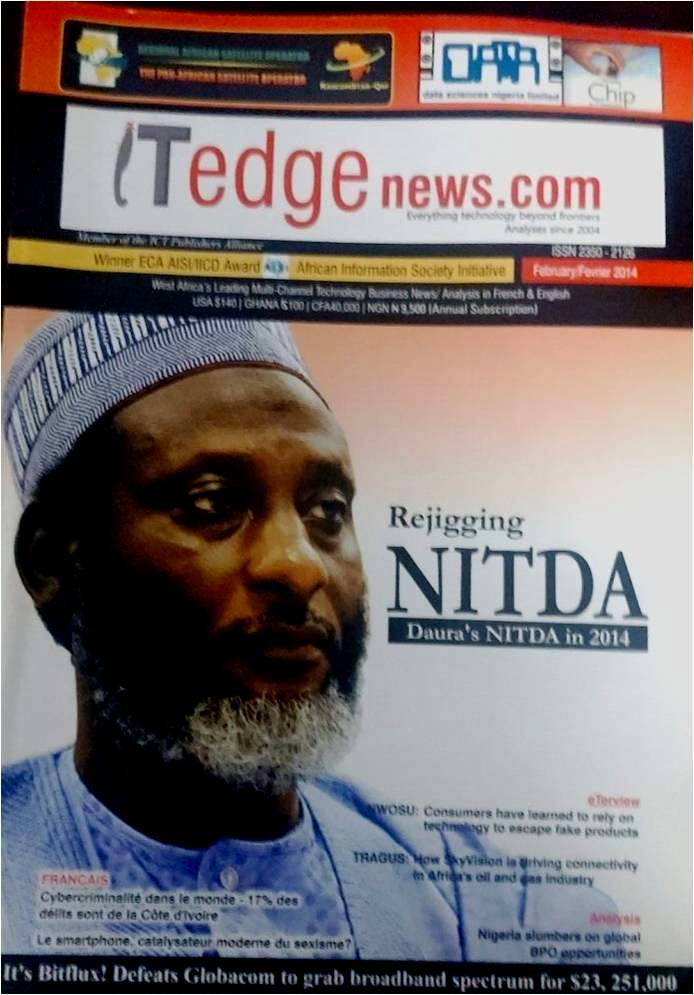 What will be your expectations of an agency that most stakeholders think have not lived up to its mandate in recent times? Its Acting Director General, Dr. Ashiru Daura, provides a peep into where the agency is headed from this year. Inside Knowhow Media International’s ‘ThinkHouse’ in January, analysts examined Daura’s statements in 2013 on NITDA and conclude that the agency could just begin to get its steps right after all. Here’s why.

Nothing could have been more damning on the NITDA as a failed agency than the recommendation that it should be scrapped by the Steven Oronsaye 2012 Committee Report on Rationalization and Harmonization of MDAs. The Committee recommended that NITDA should become a department inside the newly created Ministry of Communications Technology and its duty as IT clearinghouse for government to taking over by Galaxy Backbone Plc.

Long before the Oronsaye Recommendation was published, the umbrella body for telecommunications companies, the Association of Telecommunication Companies of Nigeria (ATCON), under its then president, Engr. Titi Omo-Ettu had publicly declared the NITDA to be an institution that had done everything but meet its mandate. ATCON grouse was that Professor Cleopas Angaye, the immediate past Director-General of the NITDA had allegedly blamed the stunted growth of the country’s ICT sector on lack of political willpower among those in government. To ATCON, NITDA under its existing best symbolized that absence of willpower and commitment.

But many stakeholders have rejected the verdict of the Oronsaye’s Committee on the NITDA and are optimistic that the agency can be re-jigged to fulfill its mandate. Since assuming the position of the acting Director General of the NITDA last year, Dr. Ashiru Daura has sought to lay out a pathway for the agency that hinges on its core mandate; particularly as they concern:

Can NITDA be re-jigged? Knowhow Media ThinkHouse offers you a quick peep into NITDA in 2014 by using Daura’s public statements in 2013 as forecast lens. Here are points for your consideration:

NITDA will focus on mandate

In one of his earliest public statements on how NITDA will go, Dr. Daura, a software expert and technocrat with long years of service within government, while interacting with members of the ICT Publishers Alliance in his office in Abuja, declares: “NITDA is a regulatory and developmental agency which is not doing what it ought to have been doing. Our concern is to concentrate on the regulatory mandate of the agency, so that we can separate the grains from the chaff in IT development.

Research, IT Jobs and software development

Another area of NITDA’s mandate is research which is very important in the development of IT. In Nigerian universities, you see people doing one thing or another. We clearly don’t have research institutes that are solely doing research on IT. We are laying emphasis on that and other areas of NITDA’s mandate to further reach out to underserved areas in IT so that IT can take over the country.

Another area to concentrate on is building IT for job creation and web creation like software development and incubation so that there is more interest and income to the country from IT. These are the areas of focus.”

Very soon, we shall establish NITDA College of scholars. We shall establish an online and physical forum where these scholars will be interacting with themselves. With that we shall be challenging them with the various problems that should be solved from the knowledge they acquired and some other thing that will be for the benefit of our country.

Will assert authority as IT clearinghouse

Ideally, we should be the clearinghouse but in many instances some of these agencies just go ahead with their projects without liaison with us. Every other person also needs to come to us. We are also laying emphasis on that too. We are reaching out to the Bureau of Public Procurement to make sure that clause is put in any IT contract award pronouncement, so that any IT procurement process must go through NITDA before it is allowed to pass, whether it is from the police or other government agencies. We are actually working on that now. But I have to admit that NITDA has been involved in some cases. NITDA was part of the process that led to the creation of NIMC.

Secondly, we are setting up Software Development Centres through our parent ministry, the ministry of communication technology. We have established two software incubation centres in Lagos and Calabar. We are planning to establish same in other geo-political zones. We hope in 2015 these incubation centres will have created 25 IT entrepreneurs. We also have plans for software testing. We will set up software testing lab to validate any software we are using in the country.

For the role software application play in any society towards development, we hope in 2015 these incubation centres will have created 25 IT entrepreneurs. We also have plans for software testing. We will set up software testing lab to validate any software we are using in the country

Global exposures to local IT efforts

NITDA is in position to express the potential of Gitex to expose our young and the older companies to global opportunities. It is about growing opportunities internationally for our local IT companies and we think we can leverage on Gitex to achieve that. We will collaborate with Gitex, mobilize everybody here in Nigeria and explain what Gitex is all about to them. That will be the beginning of the mobilization. [This statement was made by Dr Daura in October 2013 in Dubai, UAE inside the Gitex. Just before our February 2014 edition went to press, the NITDA has officially committed to Gitex 2014 as Country Partner]