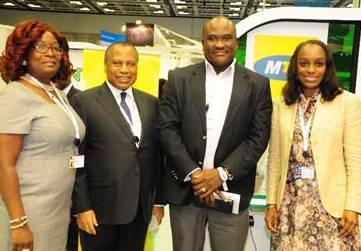 Infrastructure Companies (Infracos) in the broadband spectrum will, among other incentives, get tax holidays of between five and seven years to cushion their investments.Infracos are soon to be licensed and are expected to drive the desired broadband surge. This was one of the highlights of the Nigeria Investment meeting at the just ended ITU World 2014 in Doha, Qatar.

Speaking at the well-attended forum hosted by the Communication Technology Minister, Dr (Mrs.) Omobola Johnson as part of Nigeria’s drive for more investors into the blossoming ICT sector, participants were told that based on the Open Access Model, which has been adopted for the licensing round, beneficiaries of the licenses shall among others, get tax holidays to encourage the Infracos to invest and guarantee adequate returns on investments.
Principal Partner of KPMG, Mr. Joseph Tegbe, who are consultants to the soon to flag off licensing regime told the audience that the investors will be encouraged to veer into areas where many consider to be less commercially rewarding through subsidy, and grants may be given out to further their interest in such areas.
They will also be granted pioneer status as part of the incentives to boost their interest in investing in such areas or zones that may look unattractive.Such Infracos will get such incentives that could be up to 30 per cent mark up on their capital expenditure (Capex) and employee tax holidays as well.To qualify for these, Infracos will quantify their Capex and what it will take to rollout and how long it will take to break even.

Earlier, Executive Vice Chairman of the Nigerian Communications Commission (NCC) Dr Eugene Juwah, told the audience including potential investors from Qatar National Bank, Global Operator, Ooredoo, Vodafone, Qatar and several Diplomats that Nigeria had achieved 96 per cent teledensity with over 134 million active subscribers, and ICT contribution to national GDP of over 10 per cent.
Although over $32bn had been invested in this area so far, there is still a yawning gap in broadband penetration which stands at only six per cent at the moment. 75 million people connect to the Internet on narrow band.He encouraged would be investors to take advantage of this gap because apart from government and high networth individuals who desire these services for high data transmission, the banks, education sector and electronic commerce operators need broadband to carry out their heavy data too.
The NCC, Juwah said, has adopted the Open Access Model to promote healthy competition, affordability and global best practices in our regulatory activities. DrJohson told the audience that since ICT is being qualified in this conference as the next oil and gas, “then Nigeria has struck a gold mine because ICT is work in progress.”
Nigeria Ambassador to Qatar, MrShuaibu Ahmed said the primary mandate here in Doha, Qatar, is to make Nigeria an investment destination because Qatar has an investment appetite of over $50bn and desires to divest its economy from over reliance on oil and gas.
Managing Director of MTN Nigeria, Mr Mike Ikpoki said MTN with 58million subscribers and over $15bn investment in the last 13 years is seen to have done well, but there is still more to do in the area of broadband. Mr. Ibrahim Dikko, Executive Director at Etisalat Nigeria said in six years and over 20 million subscribers in its bargain, “Etisalat has never known a better investment profile than this because it is a network of choice for its very good quality of service because investors’ confidence is high in Nigeria”.