Thumbs up to Cameroon! They have found a way to curb road accidents. According to Raquel Muigai of CGTN Africa, Cameroon has one of the worst road safety records in the region, with more people dying in car accidents than from malaria every year. As a result, mobile app developers have launched a new technology called Traveler. This newest innovation will monitor drivers and vehicles on their routes and will save hundreds of lives in the process.

What does this mean for Nigeria? 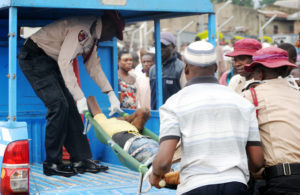 OFFICIALS OF FEDERAL ROAD SAFETY CORPS EVACUATING AN ACCIDENT VICTIM FROM AN ACCIDENT
SCENE CAUSED BY A TANKER, WHICH LOST CONTROL AND CRUSHED CARS AND MOTORCYCLES ON ZUBA-KADUNA
EXPRESSWAY AT MADALLA ON MONDAY (1/9/14).
4292/1/9/2014/BJO/AIN/NAN

Deaths from reckless driving are the third leading cause of death in Nigeria, research claims. Yes, we cannot dispute the fact that road accidents occur in both the developed and developing nations, but the developing countries clearly dominate with Nigeria having the second highest rate of road accidents among 193 ranked countries of the world. To reiterate this fact, the World Health Organization (WHO), declared Nigeria the most dangerous country in Africa with 33.7 deaths per 100,000 population every year.

This is a rotten reflection of Nigeria. The onus is on the Federal and state Governments, road safety agencies (FRSC), motorists and other stakeholders to come up with a similar innovation that will prevent or minimize accidents on the highway.