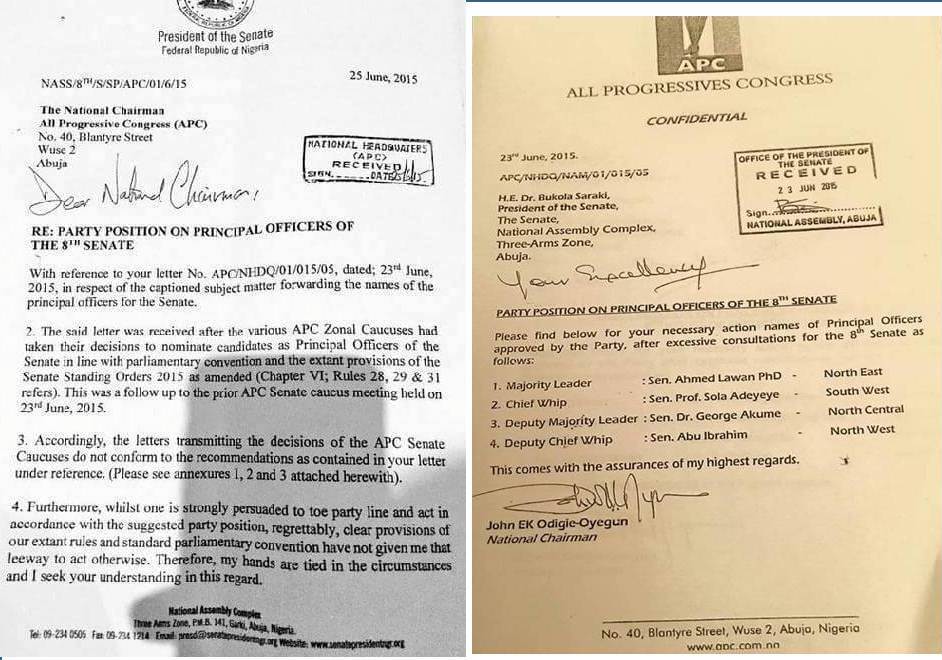 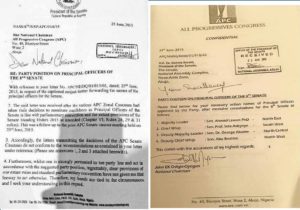 In-fighting within the All Progressive Congress (APC) over who occupies major offices in the Nigeria’s bicameral legislative assembly worsened over the weekend as the Senate’s President, Dr. Bukola Saraki, chose his men outside of his party’s directive.

The directive coached in a formal letter signed by the party’s National Chairman, Chief EK Odigie-Oyegun, was leaked online by some social media blogs.

But Saraki in clear defiance to his party’s wishes appointed Senators Ali Ndume and Bala Ibn Na’Allah as senate leaders to set the tone of what direction the Senate will take under him as Senate President.

Saraki official response claiming his hands were tied is already online – a clear attempt to thicken the online war on getting information across to web audience as the batter within rages without peace in sight.

In the lower chamber, the House of Representatives, attempts by the Speaker, Hon. Yakubu Dogara, to pick his own men ended the house processing in chaos. Members engaged themselves in full blown brawl before rolling cameras of media practitioners. The internet is buzzed with live streams and still images of Nigerian elected representatives in violent physical brawl.

The web is buzzed with analyses of how all these would weaken the APC’s ability to rule and effect the change it promises the electorates.

The Senate now on recess till July ending has promised to reconvene before then to consider the president’s list of ministerial appointees.

“As a party, APC is increasingly showing lack of internal cohesion which portends a lack of capacity to fully come to grasps with Nigeria’s pressing challenges and weakness to address the challenges,” said a social critic in Lagos.