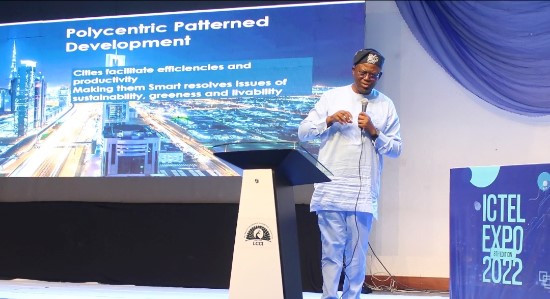 Founder of Chams Plc and Executive Chairman of SmartCity, Sir Demola Aladekomo, has called for the development of Smart Cities in Nigeria following the UN estimate of about 275 million Nigerians to migrate from rural to the urban areas by 2050.

Aladekomo spoke at the 8th edition of the Lagos Chamber of Commerce and Industry’s (LCCI) 2022 Information Communication Technology and Telecommunication (ICTEL) Expo held in Lagos recently.

The Chams founder, who spoke on Efficient Digital Infrastructures through Smart Cities, said that “migration should be seen as a process and not problem. Good management of the migrating population and understanding migration factors can help in utilizing the phenomenon in a productive way without the inherent negative impacts it has on the society.”

For former UN Secretary General, Ban Ki-Moon describes migration as “an expression of the human aspiration for dignity, safety and a better future. It is part of the social fabric, part of our very make-up as a human family.”

On Smart Cities, Aladekomo explained, “A smart city is a place where you live, work and play. A place that enhances the quality of life you live. In it also, you must be well entertained. Furthermore, it has to be environmentally friendly and sustainable. Smart cities generally provide better security and safety.’ Most importantly, its infrastructure apart from been social, physical, institutional/governance and economic should be centred on the citizen.

On existing and poorly structured cities, he recommended that they can be converted to smart cities by the use of polycentricity and agglomeration.

With polycentricity, we can begin to create new decentralized cities and settlements around Lagos for example, and manage them digitally from the beginning by making them technology enabled. While at the same time these new decentralized cities should be agglomerated in a specialized form as healthcare city, technology city, agricultural city, etc. Agglomeration enhances productivity, commerce and cost optimization, job creation and poverty alleviation.

Aladekomo further proposed the leapfrogging of relevant technology towards resolving infrastructural deficit. But to achieve this, government must recognize population growth as an opportunity, accept that smart cities should be created,  accept Rural-Urban migration not as a threat but reality, use agglomeration, polycentric approach to governance, and use technologies to play crucial roles in the development and administration.

Finally, he called for the encouragement of private sector participation, good governance and rule of law, building of sustainable institutions, and recognition / replication of our past heroes.

He informed participants at the expo that SmartCity PLC is currently building smart cities to create an intelligent future through their projects at Ibadan and Osogbo through suburb polycentrisim.

The LCCI ICTEL Expo is a marketplace where Business, Tech & Innovation come together to explore opportunities in Nigeria’s Digital Economy. It enables stakeholders to engage in robust discussions on government’s plans to grow the digital economy from 10.68% to 12.54% and improve e-governance by 100% by 2025.